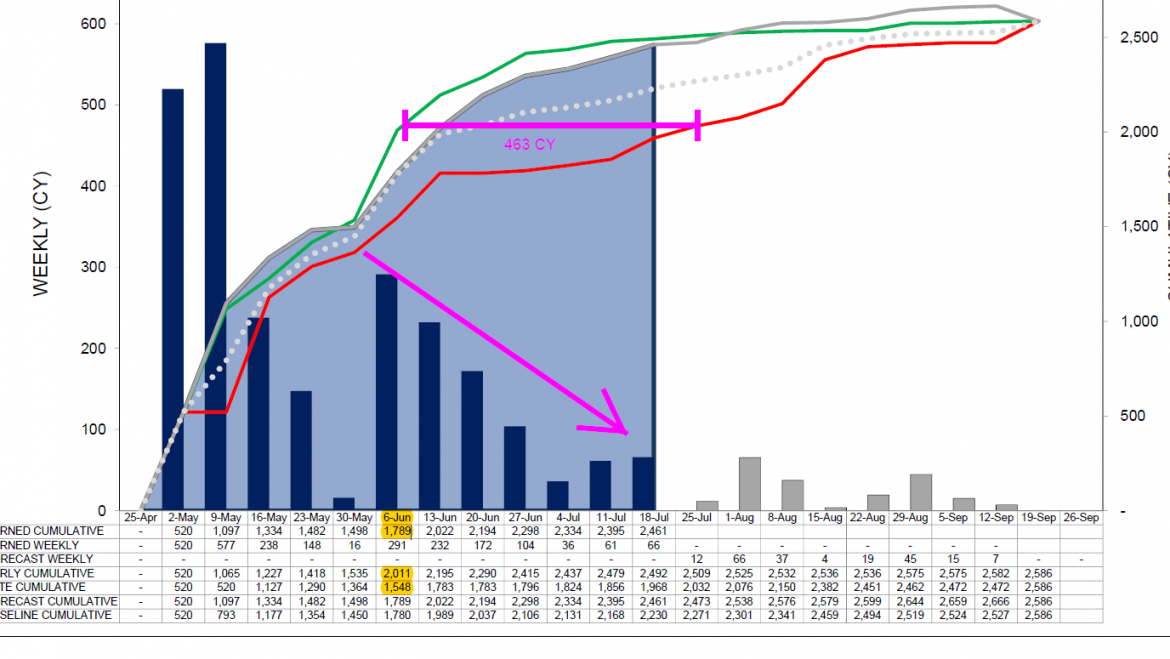 Like the cheerleaders that lost the diss war, “scoreboard, scoreboard” is used to humble teams who’s performance lags behind. In construction, “Schedule, schedule” becomes the jeer towards contactors that don’t keep up with their plan. Of course, in business, it goes beyond high school egos. Contractors don’t get “dragged” with simple put downs; they get fired when they don’t perform.

In sports it’s simple to see who’s winning, hence, “Scoreboard, scoreboard”. But in construction, few job-sites have a functioning scoreboard, so we rely upon Earned Value Management. It promises the score via metrics and indicators. For schedule performance, the math is simple arithmetic, performance = earned / planned, at a certain time.

That time component is actually a bit trickier, which is probably why scheduling software makes most cringe. Most contracts require the use of Critical Path software to deliver the time element. Most schedules show the earliest date a task could be accomplished. Those are typically used to calculate the “planned value” for a task. If a contractor is falling behind the planned value, it’s indictive that the contractor is underperforming. Since Schedule Performance Indicator (SPI) is earned/planned, the underperforming contractor is expected to have a SPI less than 1.0. Earning less than planned produces a value under 1.0.

Why does any of this matter?

For owners, anything that gets the contractor completed as quickly as possible reduces risk. As a contractor, performing the work in the most efficient manner increases profit. In economics, it’s classic risk and reward, the topic that many PhDs have been earned.  In scheduling terms, the owner manages to the early dates, contractors to somewhere in-between the early and late. Unfortunately (or not), there aren’t many PhDs doing construction scheduling.

However, there are plenty of JDs, MBAs, and CPAs executing contracts. Add a couple PMPs into the mix, and…I’ve now seen my first contract that permits the contract to be terminated if the contractor is at a SPI of 0.9 or less. According to the…earliest dates. Not the latest, nor the sweet spot in-between the early and late dates.

It poses a fundamental question: If the contractor isn’t performing everything as early as they can, are they late? Or, should they be given the opportunity to perform the task at the latest date possible, before being considered late? In this case, the contract only allows production to be 10% less than the most optimistic projection. Is that a tolerable amount of risk for a owner to accept? Or should we give the contractor more leeway in that “sweet spot” between ASAP and LATE.

Below, it’s that sweet spot is the area with the horizontal pink line.

Focusing on 6-Jun (yellow), the contractor could have poured up to 2,011 CY of concrete (early cumulative),  and needed to pour at least 1,548 CY (cumulative late) to keep from potentially delaying the end date of the project. In real life, this gap existed because the compressor foundations needed to cure for 30 days, and the piping wasn’t going to be available to install until late July/early August. The compressor building floor was around 265 CY, which is the bulk of the delta, 465 CY, between early and late.

Does the contractor deserve to be fired or praised?

In this case, look at the pink arrow going down. The contractor was aware of his “float” and downsized his crews in a controlled manner (pick of the litter), and caught the early green line by mid-July. Even though this is only a portion of the project, the problem is clear: Using the early planned values for SPI calculations will skew SPI towards a false negative indicator.

Integrating objective measurements is a powerful tool to measure performance. I’m not advocating contractors be allowed to underperform, just given the chance to optimize their profitability while accomplishing the work the owner has been promised. And, when they are jeered to look at the scoreboard, they actually know the score.